What is a DnD Dice set you may ask?  DnD (aka Dungeons and Dragons) Dice Sets consist of a four sided die (d4), six sided die (d6), eight sided die (d8), ten-sided die (d10), percentile die (d%), twelve-sided die (d12), and twenty-sided die (d20).  They are also sometimes referred to as polyhedral dice or rpg (role playing game) dice.  Do you need the whole set to play DnD?  For most actions you will be rolling the 20 sided die, however the others are important too for rolling things like abilities or damage.  DnD dice sets are commonly sold in 7-piece polyhedral dice sets, with one of each d4, d6, d8, d10, d%, d12 & d20.  Many players will find it useful to pick up an extra d20 for rolling advantage or disadvantage, for example.  15-piece polyhedral dice sets are also available, which include 3 d4, 4 d6, 2 d8, 1 d10, 1 d%, 1 d12, and 3 d20.  There are so many colors of dice to choose from.  Pick a set to match your character, or if you are having bad luck rolls switch to a different set.  Some glow in the dark (for example Chessex Borealis or Sirius Glowworm), and some are made of metal or gemstone.  We are always adding new DnD dice sets here at off the shelf games.  Check out what we have in stock by stopping at the store or online  Here are some of our favorites:

Off The Shelf Games

Your Friendly Local Game Store.  Come spend a few hours with us and explore our library of over 1400 board games! 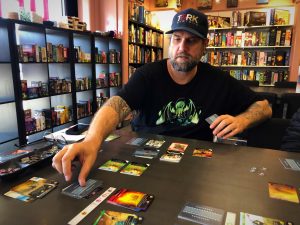 RSVP to Events on Meetup!

Watch Us On Twitch!

We want everyone to stay healthy, and follow the CDC recommendations to prevent the spread of germs.  All staff have received COVID-19 vaccinations. We ask that you do not enter the store if you have any symptoms of any infectious disease, or have any reason to believe you may be infected/contagious. 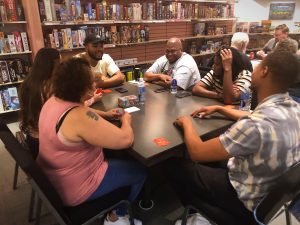