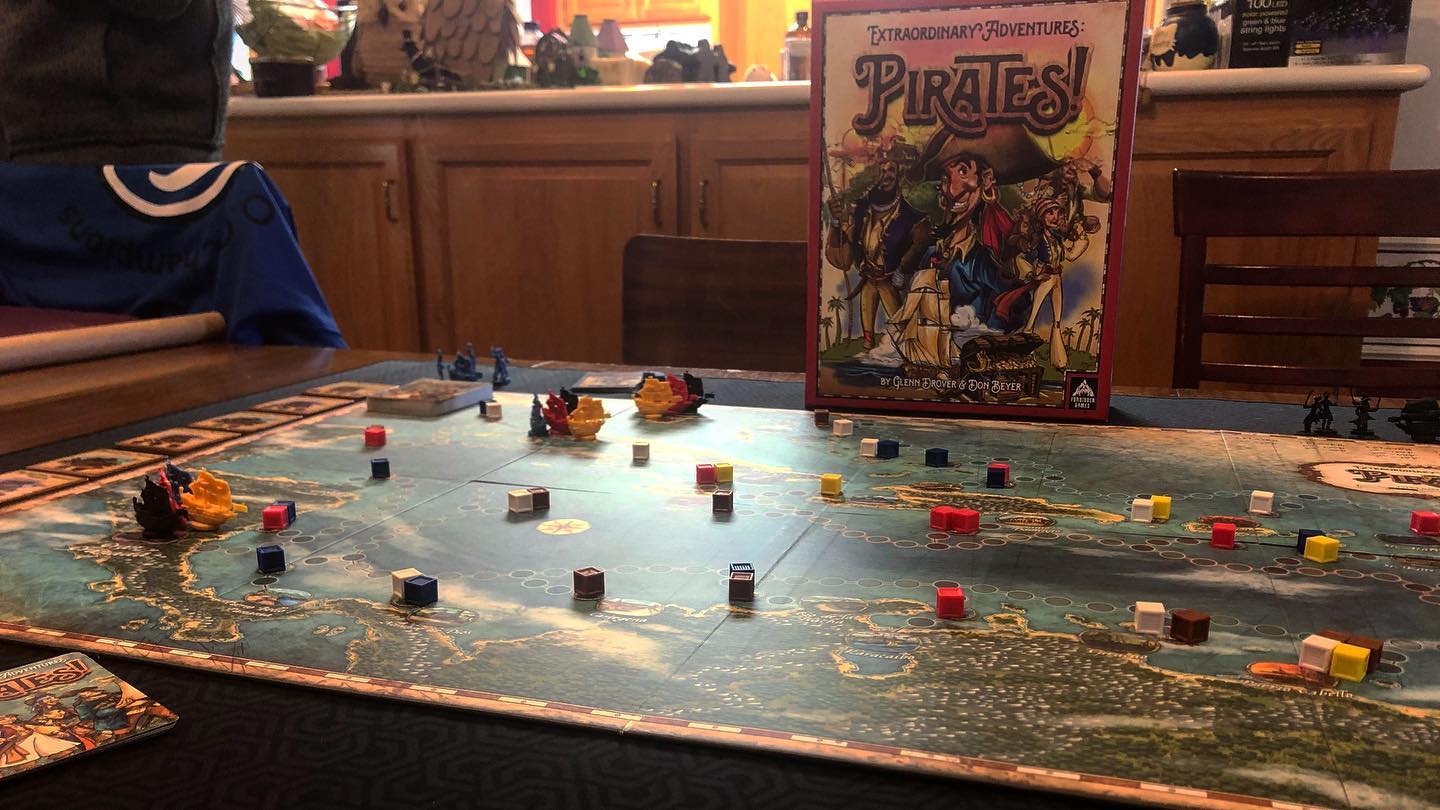 Ahoy there! We’ve just been transported back into the Golden Age of Piracy, sailing from places like Port Royal to Tortuga in Don Bayer and Glenn Drovers game Extraordinary Adventures: Pirates.
Published by Forbidden Games, this is a set collection game, where players race to get to the limited crates located on various merchant ships. This game also has a deck-building component, as you gather more cards that give you and your 3 pirate ships more power throughout the game. We here at Off the Shelf greatly enjoyed this blend of mechanics, and generally had a lot of fun playing this game! You may have to think ahead, but overall it’s great for the family.

You and your family can play this very game by visiting our store, Off the Shelf Games at 109 Rea Avenue! If you’ve played this game before, or you have any recommendations for us to play (and possibly include in the store library) leave a comment down below, and we’ll see you in December!

Put on your pirate hats and get in the buccaneering spirit as we embark on a race through the Carribean in Extraordinary Adventures: Pirates! A triple threat, this game has deck-building, set collection, and racing mechanics. Don’t let all of that deter you, though, it’s actually quite simple to play.

Extraordinary Adventures: Pirates is a deck-building game, so naturally the cards are an integral part of it. Each player gets a starting deck of 10 cards, signified by their background which corresponds to the player color. The rest of the cards are split into two decks, clearly signified by either a coin or island symbol in the upper left hand corner. Furthermore, a symbol in the upper right hand corner signifies if the card has a persistent effect or if it’s a one time use. Some of the text can be confusing when first encountered, but after enough game-plays the cards are all clear and easy to understand.

Now, it should be noted that there are a couple versions of this game. The base game has wooden tokens for the pirates, cargo, and ships, while the kickstarter game has plastic miniatures and cubes.We have the kickstarter version, and as of now I have not played with the components from the base game, so I am unable to comment on them. That being said, the plastic ships, pirates, and cargo cubes are all wonderfully made. Each player’s pirates look different from the other players, and while the ships all look the same they are very sturdy and easy to handle. The cargo cubes are exceptionally well made, and they look astounding. Furthermore, the tiles used for the treasure that players can get throughout the game are thick and big enough that it’s easy to see what’s on them.

All of this being said, there is one problem with the components of this game, and that’s the board. The spaces on the three tracks where the ships and cargo cubes are supposed to go are simply too small. Each space can only fit one ship, and since players can share spaces the other ships have to be pushed off, and then when the first ship moves the players can become confused as they are now left with a ship that isn’t on a space. By making the board bigger or tweaking the course so it’s more curvy, the creators could have made the circles bigger so that the ships could all fit better.

Despite the mixture of three different game mechanics, Extraordinary Adventures: Pirates is really simple to pick up and play. Every turn, players draw up to a hand of five cards, of which they play three cards. Players will then use these cards to raid merchant ships for cargo, and then go to port to turn in the stolen goods for treasure, which will earn you victory points.

Each card has two parts to it, a movement number in the bottom right hand corner, and a power (or filler text) in the caption underneath the pictures. Players will choose whether to use the power or the movement on each individual card, giving players the choice of a powerful action at the loss of movement down the track. Oftentimes, players must make crucial decisions to maximize their powers.

An example of this is the Sailing Master’s Mate card, the most powerful card in a player’s initial deck.

The Sailing Master’s Mate allows you to either move three spaces, or to permanently discard a card in your hand  from the game. Having this card allows you to thin your deck, an important mechanism for all deck-building games – however, it’s movement of three is alluring to most, if not all, players. Players will have to decide when and how to play cards like these, making decisions between powers and movement all throughout the game.

This is a very thematic game, all of which is emphasized by the method of getting new cards. Players receive new “pirates” (cards) when they either raid a merchant ship (that still has cargo on it) or stop at a port. These new cards cost nothing, so thematically it represents the player picking up more crew members, either by force or by their will.

Another part of the game that we really liked was the placement of pirates at the start of the game. Players are faced with a variety of choices, and since they have four pirates to place on three tracks, players have to choose a track to favor. Players also have to consider at what point they think they’ll be ready to turn in cubes for a treasure tile, since pirates are much more valuable when paired with treasure. Either way, the pirates add a fun and interesting layer to the game, and we definitely recommend using them in all your playthroughs.

We love pirate games, some of our favorites being Skull King and Jamaica, so we’re so happy we can add another great pirate game to the list! With it’s simple mechanics, this game is easy enough so that the whole family can pick it up and play, and it has enough strategic elements so that everyone can exercise their minds and have a great time! Add all that with the great components, racing through the Caribbean has never been funner!